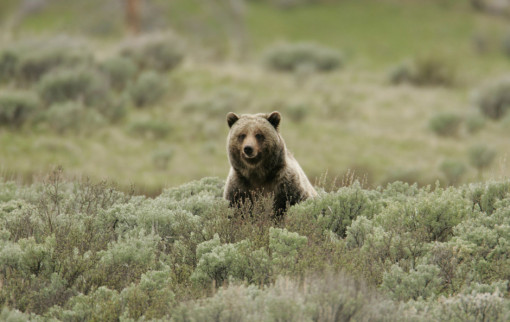 There are tens of millions of cows in the U.S. but only about 700 grizzly bears in the remote and wild public lands known as the Greater Yellowstone Ecosystem that include and surround America’s first national park.  Grizzlies are listed as “Threatened” under the Endangered Species Act and the federal government is legally mandated to stave off extinction by restoring a sustainable population of these national icons.

Part of the Greater Yellowstone Ecosystem includes 267 square miles of Wyoming’s Upper Green River area, where the number of conflicts between grizzly bears and privately-owned livestock is much higher than other parts of the Greater Yellowstone Ecosystem.  At least 35 grizzly bears have been reported killed on the area’s cattle grazing allotments in just the last 10 years – that’s three and a half dead grizzlies a year in just this one area!  And now the Forest Service has approved doubling the number of grizzly bears that can be killed to protect cattle in the next decade.

Despite two rulings by federal courts that the Yellowstone Ecosystem grizzlies must be protected under the Endangered Species Act, the U.S. Fish and Wildlife Service issued a Biological Opinion last year authorizing killing up to 72 grizzly bears over the next ten years within the Upper Green River Area Rangeland Project.

In January the Alliance for the Wild Rockies, Yellowstone to Uintas Connection and Western Watersheds Project sent the Forest Service a 60-day Notice of Intent to Sue if it went forward without complying with the National Environmental Policy Act and the Endangered Species Act.  The agency ignored the Notice and in March we filed a lawsuit to stop the project.  Cattle grazing is slated to begin again June 14th — and three grizzlies have already been killed, prompting us to seek a Preliminary Injunction to immediately halt the grizzly deaths.

The current grazing management practices on these allotments are certain to put more grizzlies in harm’s way.  There is little or no evidence supporting the current plan of killing grizzly bears every year to resolve grizzly-cattle conflicts. This is especially true under the existing circumstances where cattle are placed in historic grizzly habitat.  The bears are simply doing what bears do, which is seek out and eat available food. As a primary, high-quality food, sticking cows in grizzly habitat creates an “ecological trap” that results in dead bears.

But there is plenty of evidence that non-lethal measures can reduce levels of depredation for sustained periods of time.  These simple but effective measures include using livestock guard dogs; selective deployment of electric fence and other deterrents; relocation of pastures during key periods of livestock vulnerability; and removal of livestock carcasses.

The most effective way to stop killing grizzly bears that conflict with private livestock grazing on public land is for the federal government to terminate those grazing allotments where chronic grizzly-livestock conflicts occur.  Such measures have been widely and successfully implemented elsewhere in the Greater Yellowstone Ecosystem.  Simply put, no grizzlies should be killed for cows,  — especially in the Upper Green River watershed where more grizzlies are being killed than being born — and we are more than willing to take this fight to court to stop the Trump administration from carrying out this needless slaughter.