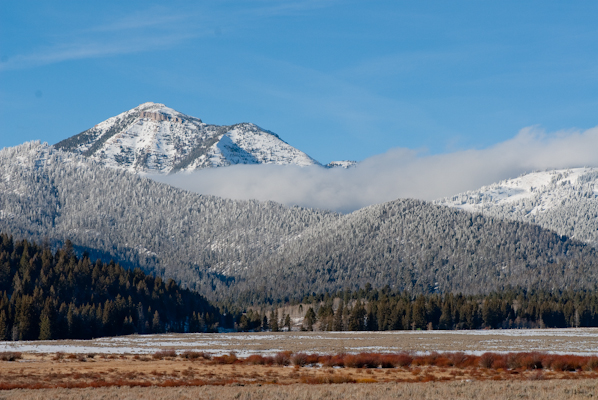 One of the Trump administration’s worst projects, which would have burned a million acres of the Caribou-Targhee National Forest, has been halted in its tracks by Biden’s Forest Service after the Alliance for the Wild Rockies, Native Ecosystems Council, and Yellowstone to Uintas submitted detailed comments opposing this insane idea.

The Targhee Prescribed Fire project was stuffed through in the closing days of the Trump administration and would undoubtedly have been ruled illegal since the agency attempted to use a categorical exclusion to avoid environmental analysis on the project, which would have burned a million acres of the Targhee portion of the Caribou-Targhee National Forest. It is indicative of the total disregard for the law that Donald J. Trump and his political appointees would even propose a project that included recommended wilderness, the Palisades Wilderness Study Area, and Inventoried Roadless Areas on the western side of Yellowstone National Park.

To put it in perspective, one million acres is 1,562.5 square miles, nearly the size of the entire Bob Marshall Wilderness Complex – which is the fifth largest in the Lower 48 states. That’s a million acres of carbon-absorbing forests with functioning ecosystems that are home to grizzly bears, lynx, and wolverines and which the Trump administration wanted to destroy.

It’s also worth noting that the Targhee National Forest was the site of the largest clear-cut timber sale in the Lower 48 states in the 1970s. Back in 2005 the Alliance for the Wild Rockies and Native Ecosystems Council sued the Forest Service to stop a massive old-growth logging project. In that case, which we won, Federal Judge Lynn Winmill ruled that the Forest Service had violated the Targhee Forest Plan because it had already logged almost all of the old-growth forests and by law could not log again until old-growth habitat was restored, which would take several hundred years.

Winmill also noted that a 1996 Forest Service inventory of old-growth “manipulated the data to reach a desired result.” Specifically, the agency ignored its own study from two years earlier that not only documented very little old growth left but was riddled with statistical errors such as arbitrarily adding an extra inch to the diameter of the trees it surveyed to inflate the calculations for old-growth.

It comes as no surprise that the environmentally disastrous Trump administration was desperate to approve the project in the final days of his presidency. But using a “categorical exclusion” to exempt the entire project from National Environmental Policy Act was an over-the-top abuse. Categorical exclusions were originally intended for minor routine maintenance needs like painting outhouses — not million acre burning projects in grizzly bear and lynx habitat on the border of Yellowstone National Park. By not taking the legally-required “hard look” at direct or indirect effects the Forest Service implied there would have been no cumulative effects – a wholly unwarranted assumption since the agency didn’t even bother to document existing conditions or the project’s potential impacts.

Moreover, by not conducting an environmental impact analysis or allowing public review and comment the Forest Service violated the National Environmental Policy Act, misrepresented the presence of endangered species in the project area, and ignored the requirements of its own Targhee Forest Plan.

Under Trump, the Caribou-Targhee National Forest also proposed to burn up to 750,000 acres in the Caribou portion of the forest – and once again attempted to exempt it from the legally-required environmental analysis. Now the Biden administration has ordered that project halted until the Forest Service follows the law, writes an Environmental Assessment, and submits it for public review and comment.

You can help by using our easy form to ask your Senators and Representatives to cosponsor the Northern Rockies Ecosystem Protection Act. And if you’d like to help us continue to protect and restore the Northern Rockies we’d gratefully welcome your support at the Alliance for the Wild Rockies.