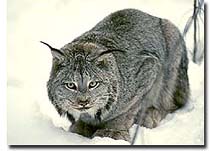 According to a news release dated March 21, 2000, the U.S. Fish & Wildlife Service announced that the Canada lynx has been listed as a threatened species under the Endangered Species Act within the contiguous United States. A species is listed as threatened when it is likely to become endangered throughout all or a significant portion of its range in the foreseeable future.

The Canada lynx (Lynx canadenis) is the only lynx in North America and is a rare forest-dwelling cat of northern latitudes. Lynx feed primarily on snowshoe hares but will also feed on small mammals and birds. They are so rare that biologists still aren’t certain of their status in most states. The Northern Rockies and Cascades region supports the largest amount of lynx habitat in the lower 48 states and has the strongest evidence of long-term occurrence of resident lynx population, both historically and currently. Breeding populations of lynx now exist only in Montana, Washington, and Maine, three quarters of them in Montana. The USFWS has concluded that the Northern Rockies/Cascade region is the primary region necessary to support the continued long-term existence of a healthy and viable lynx population in the lower 48. U.S. Forest Service management plans will be amended to lynx habitat needs. The resulting changes could halt ski area expansions, new snowmobile and cross-country ski trails, and timber cutting activities across millions of acres of lynx habitat.

It is important to note that lynx have been listed as one unit in the contiguous United States, so recovery and eventual de-listing as one “lower 48 unit” can be expected. The grizzly bear listed in 1975 was also listed as one unit in the lower 48 states but agencies and politicians have since attempted sporadic region by region de-listing, the Yellowstone population being an example.