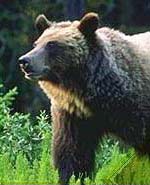 MISSOULA—Attorneys for the conservation group Alliance for the Wild Rockies today filed a 40-page legal document with the Federal District Court in Missoula alleging the Kootenai and Idaho Panhandle National Forests are jeopardizing the survival of grizzly bears.

At the center of the current controversy is an access management “rule set” adopted by the Kootenai and Panhandle National Forests which the Alliance alleges was done in violation of procedures required by the National Environmental Policy Act, the National Forest Management Act and the Endangered Species Act. Supposedly adopted to help the struggling grizzly bear populations rebound, the suit contends the new rules will harm bears by allowing even more motorized use in critical grizzly habitats, while restricting the bears to small areas which are isolated from one another.

“At the rate we are going, the next step for these endangered populations is extinction,” said Mike Bader, executive director of the Alliance for the Wild Rockies. “The government is playing a shell game in order to allow heavy logging to continue in grizzly country.”

The government adopted the new rules without a required public involvement process and despite concerns and objections raised by biologists with the U.S. Fish & Wildlife Service, the plans were adopted and implemented, allowing even more motorized use in grizzly bear habitat than before, even after the U.S. Fish & Wildlife Service found the Cabinet-Yaak and Selkirk grizzly bear populations are warranted for upgrading from threatened to endangered status. The Service has written that the extensive road networks and logging activity in the Cabinet-Yaak and Selkirk regions have put the bears in danger of extinction.

“The science is clear and not hard to understand — grizzly bears need large blocks of habitat that is free from roads,” said Marc Fink of the Western Environmental Law Center, the lead attorney on the case. “The Forest Service has had many years to make the needed changes, but continues to stall.”

The suit seeks an injunction preventing implementation of the access rule set until such time as proper environmental analysis and public involvement pursuant to the National Environmental Policy Act are completed and the forests have amended their Forest Plans to reflect the new management changes. The suit also seeks re-initiation of formal and full biological consultation between the Forest Service and the U.S. Fish & Wildlife Service.

“It’s like running the wrong way for a touchdown,” said Bader. “When the biologists said the bears are endangered and moving closer to extinction, the Forest Service actually increased roadbuilding, motorized use and logging in the grizzly’s last refuge.”