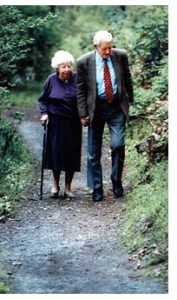 David R. Brower, recognized around the globe for his pioneering leadership in protecting the environment and wild places of the Earth, died on Sunday afternoon, November 5, at his home in Berkeley, CA, surrounded by his family. Brower was 88 years old, and died from complications related to cancer.

“We have sadly lost the most inspirational leader of efforts to protect and restore the Earth,” stated Dave Phillips, Executive Director of Earth Island Institute. He continued: “Dave Brower is a latter-day John Muir.”

Brower’s career ranged from climbing some of the Sierra’s most formidable peaks, to successfully fighting to stop dams in Dinosaur National Monument and in Grand Canyon National Park, to leading environmentalists to re-think support of nuclear power, to being the first Executive Director of the Sierra Club and going on to found Friends of the Earth.

Among his other accomplishments, he led campaigns to establish nine new national parks and seashores including Point Reyes, the North Cascades, and the Redwoods, and helped gain passage of the Wilderness Act of 1964, which protects millions of acres of public lands in pristine condition. He created the genre of “exhibit format” books of exquisite outdoor photography, always tied to a conservation theme, and pioneered the practice of running full-page environmental campaign advertisements in newspapers. Many consider him the founder of the modern environmental movement, alongside John Muir and Rachel Carson. 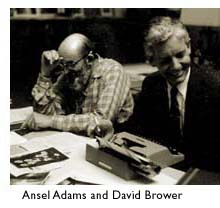 Brower’s insistence on taking bold stands for environmental protection and his leadership where others dared not go inspired several generations of activists. He was nominated three times for the Nobel Peace Prize, and received numerous awards throughout his life, including 1998’s Blue Planet Award.

Brower’s message on the current state of the Earth were at once dire and optimistic and are reflected in his favorite quotes. Of his own career he paraphrased CA Senator Tom Hayden: “All I have been able to do in my career is to slow the rate at which things get worse.” But he urged environmentalists to heed the words of Goethe: “Anything you can do or dream you can, begin it. Boldness has genius, power, and magic in it.”