by Perry Backus, The Montana Standard

DILLON — The Forest Service and two environmental groups evidently don’t see eye to eye on a proposal to work on portions of the Mussigbrod and Middle Fork fires that burned in 2000.

And now it’s going to be up to a federal judge to sort it out. 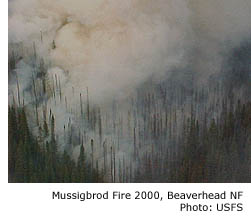 At stake is the Forest Service’s proposal to address effects of the fires that burned about 77,000 acres in the Beaverhead-Deerlodge National Forest in the summer of 2000. The agency says the Post Fire Vegetation and Fuels Management Environmental Impact Statement looks to reduce the risk of future fires, addresses the potential of a bark beetle outbreak, and works to restore willows, spruce and mature Douglas fir trees.

But the Alliance for the Wild Rockies and Native Ecosystems Council say the proposed action would result in tons of sediment being dumped into the North Fork of the Big Hole River and its tributaries.

On Tuesday, the groups filed suit in Missoula federal court in an effort to stop the proposal. The group’s appeal to the Forest Service was overturned earlier this year. Wisdom District Ranger Dennis Havig said he is disappointed the groups decided to pursue the matter into court.

“I think this is a good project and one that we need to do,” said Havig. “The value of the wood that’s harvested will pay for the work we need to do on the ground.” Havig said the agency carefully selected areas to harvest in an effort to reduce fuels for future fires. Nearly all of the trees harvested were killed by the fires that swept through the area in 2000. “I guarantee the focus on was dead trees,” he said. “We did everything we could to avoid live trees.”

The proposal calls for harvesting about 835 acres and the largest clear-cut would be about 79 acres. “The areas being harvested are relatively small,” he said. “We’re not doing this as a salvage sale, if that had been our purpose, there are probably 7,000 to 8,000 acres out there that could have been salvaged.”

Havig said the agency chose areas connected to places where timber harvest had occurred in 1960s, 1970s and 1980s. Firefighters noticed that fire slowed when it ran into those earlier harvest units in 2000. By removing the fuel now, Havig said firefighters will have a place to catch the fire in the future. “We just didn’t go helter-skelter across the forest,” he said. “We looked for opportunities to be able slow a fire in the future.”

Havig said the harvest, which mostly would occur through the use of helicopters or over the snow to avoid soil disturbance, would be through a stewardship contract. The money the agency received for the logs would be used to complete the work on the ground, including spraying of noxious weeds and road repair. “The timber sale is not going to pay for all the NEPA (paperwork) costs,” he said. “It will help us pay for the work we get done on the ground.”

None of the proposed clear-cuts is in the Highway 43 corridor, which is considered the Lewis and Clark Trail, said Havig. The closest harvest unit is a couple of miles away from the corridor, he said.

The groups say the proposed project would violate the federal Clean Water Act and insisted the agency wait until a cleanup plan is completed. “Instead of working on stabilizing soils in the Big Hole watershed, the Beaverhead National Forest wants to clear cut 850 acres of both dead and green trees at a cost to taxpayers of over $1,000,000, and dump more sediment into the Big Hole watershed,” said Michael Garrity, executive director of the Alliance for the Wild Rockies, in a press release.

Garrity said the proposal would cost taxpayers $1,018,800. Havig said he’s not sure from where that figure came.

“With the Lewis and Clark bicentennial approaching, the Beaverhead National Forest wants to clear-cut along the Lewis and Clark trail and further pollute Trail Creek, the creek William Clark followed down into the Big Hole Valley,” Garrity said. Rather than lose $1 million polluting a blue ribbon trout stream, the Forest Service should work with the EPAs to develop a cleanup plan or “total maximum daily load” to restore these streams, said Garrity, in the press release.

Forest Service studies have shown roadless areas provide clean drinking water and function as biological strongholds for populations of threatened and endangered species, the group’s press release said. “Now the Forest Service wants to violate the federal Clean Water Act by dumping tons of sediment from logging into a blue ribbon trout stream,” said John Walden, a Butte fisherman and alliance board member. “This is nothing but a big government boondoggle.”