HELENA—A proposed copper and silver mine challenged by environmental groups — and by jeweler Tiffany & Co. — has been sidelined by a judge who found federal officials gave approval without adequately considering potential harm to imperiled bears and fish. 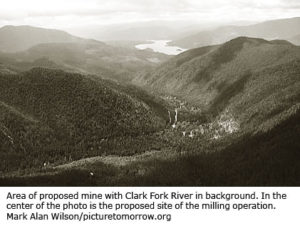 Revett proposed developing the Rock Creek mine beneath the Cabinet Mountains Wilderness Area in northwestern Montana. In a full-page advertisement last year in The Washington Post, New York’s Tiffany demanded the federal government reject the mine and change the nation’s mining law written nearly 135 years ago.

On Wednesday, environmental groups that filed a lawsuit challenging the mine cheered the ruling Molloy issued two days earlier.

“It’s a huge victory for extremely imperiled wildlife and for a lot of folks in northwest Montana who care about clean water and having unspoiled wilderness in the Cabinet Mountains,” said Tim Preso of Earthjustice, a coalition that includes the Sierra Club, the Natural Resources Defense Council and the Alliance for the Wild Rockies.

“Mining copper and silver is important, but there are places to do it, and as Tiffany pointed out, this isn’t one of them.”

In its ad, the jeweler said the mine area is more valuable as a place for wildlife than for mineral extraction. The trade group Jewelers of America said last year the industry already had begun demanding that raw materials come from companies friendly to the environment.

At an auto-repair shop in Trout Creek, a community near the Rock Creek site, proprietor Shad Franck said Wednesday the court decision is a setback. The mine would have given people “some place to work around here,” said Franck, noting the decline of the area’s timber industry and its well-paying jobs.

A call seeking comment on Molloy’s decision was not returned by William Orchow, president of Revett, based in Spokane, Wash.

Rock Creek was one of two proposed Cabinet Mountains mines and was sited on the west slope of the mountain range. The other, known as the Montanore project, is on the east slope and has not progressed as far through the regulatory process. Mines Management Inc., also in Spokane, wants to mine silver and copper at Montanore.

The company’s president, Glenn Dobbs, said Wednesday that he needs time to study Molloy’s decision before reaching any conclusions about possible implications for his project.

“Fish and Wildlife is, typically I believe, pretty thorough in what they do,” Dobbs said.

In Trout Creek, resident Peter Lupsha said Molloy ruled on behalf of a “paradise” where Theodore Roosevelt hunted mountain goats a century ago.

“The price of metals may go up, but the price of (clean) water and the price of an ecosystem that is balanced will always be more precious than gold,” said Lupsha, who moved to Montana after retiring from the University of New Mexico faculty.

The controversy surrounding the Rock Creek proposal included critics in the Sandpoint, Idaho, area. They said they worried the Clark Fork River in Montana would be polluted by the mine project and harm Idaho’s Lake Pend Oreille, which is fed by the river.

Plans for the mine included a railroad station, a pipeline, power lines and a treatment plant for mine waste, plus several miles of road construction and reconstruction. The infrastructure was planned for 1,560 acres of public and private land in the Cabinet range.

An amended biological opinion the Fish and Wildlife Service issued in 2003 found a modified plan for the mine, less extensive than an earlier plan, posed “no jeopardy” to threatened or endangered species.

Molloy said there is a “clear possibility” that the Cabinet grizzly bear population is not increasing, and “contemplating the loss of additional bears related to the mine is not rational.”