The Northern Rockies Ecosystem Protection Act (NREPA), H.R. 488, has experienced a swelling of support recently as activists from around the country converged on Washington, D.C. for a week long lobby effort sponsored by AWR, The Sierra Club, and Idaho Conservation League. 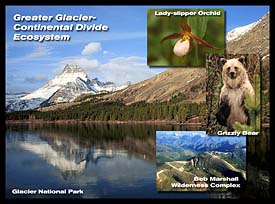 More than 60 visits by grassroots activists to Congressional offices helped to boost support to an all-time high of 94 co-sponsors as of press time. Participating for AWR were Mike Wood, Bob Clark, and Kelly O’Neal. Kathy Richmond came from the Idaho Conservation League and Jennifer Ferenstein, Betsy Gaines, and Christine Phillips were key Sierra Club participants. We would like to recognize the incredible effort of all the dedicated folks who helped make the NREPA lobby week a huge success; Sierra Club volunteers from around the nation who came to DC are: Jack Robbins, Kurt Kemcer, Chuck Lang, Sandy Lownsdale, Bob DeGroot, Kathy Richmond, Bart Semcer. Also, much of the success of this trip rests on the people who did the organizing and outreach; Dan Lavery and Melanie Griffin from the Sierra Club DC office, Mark Alan Wilson and Milo Burcham for their wonderful images of the Northern Rockies and wildlife, and Jamie Lennox at AWR who pumped out countless e-mail alerts across the country. When the dust settled, NREPA gained 9 new co-sponsors with more likely in the coming weeks.

During the lobby week a reception was held in Washington to commemorate the hard work of some key NREPA proponents. Lead Sponsors Christopher Shays (R-CT) and Carolyn Maloney (D-NY) along with long time NREPA advocate and AWR board member Carole King were recognized for their diligent effort on behalf NREPA. Also in attendance, Sierra Club President Chuck McGrady and Executive Director Carl Pope, Wilderness Society president Bill Meadows, several members of Congress and their staff.

This latest lobby week was a shining example of conservationists working together to attain mutual goals. A special thanks goes out to the Idaho Conservation League for their participation an assistance in our collective efforts to protect the Wild Rockies Bioregion.