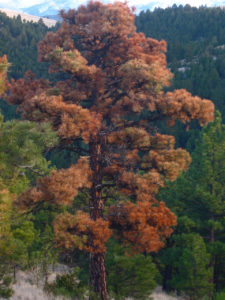 The current pine beetle “outbreak” that has led to tree mortality among Rocky Mountain forests has prompted some people to suggest that beetles are “destroying” our forests and that beetle-killed trees will invariably lead to larger wildfires.

At the heart of this issue are flawed assumptions about wildfires, what constitutes a healthy forest and the options available to humans in face of natural processes that are inconvenient and get in the way of our designs.

While it may seem intuitive that dead trees will lead to more fires, there is little scientific evidence to support the contention that beetle-killed trees substantially increase risk of large blazes. In fact, there is evidence to suggest otherwise.

Bark beetles tend to focus on larger trees, and not all trees are killed. This has important implications for fire risk. Fine fuels – not large snags – are the prime ingredient for sustained fire. After a major beetle outbreak, and once the red needles and small branches have broken off the trees, all that remains are upright big boles that do not burn particularly well.

To sustain a blaze among a snag forest you usually need fine fuels to maintain the heating process. That is why one uses small kindling and other fine fuels to start a campfire, and must continuously feed small wood and/or a sufficient bed of coals under the bigger logs to keep the fire going.

Ultimately, fuels do not control fires. If the climate/weather isn’t conducive for fire spread, it doesn’t much matter how much dead wood you have piled up, you won’t get a large fire. As an extreme example, think of all the dead wood lying around on the ground in old-growth West Coast rainforests – tons of fuel, but few fires – because it’s too wet to burn.

Large blazes are driven by a combination of extreme drought, low humidity, high temperatures and, most importantly, wind. These conditions do not occur in the same place at the same time very frequently – which is why there are often decades to centuries between major blazes and most fires go out without burning more than a few acres.

Even more surprising is that a forest dominated by bug-killed snags may be less vulnerable to a blaze than a green forest. Just as a recently burned forest often acts as a fire break due to limited fine fuels, bug-killed trees affect fire spread in much the same way. In fact, green trees stressed by drought can have internal moisture levels drop lower than kiln dried lumber, but because they still possess flammable resin-filled needles and small branches that burn almost explosively, green trees are sometimes more flammable than dead trees.

Even more importantly, bark beetles are increasingly recognized by ecologists as “ecosystem engineers,” much as beavers are now recognized as important to the creation of wetlands and riparian areas. Beetles are essential to maintaining biodiversity and healthy forests.

One study found that bark beetles created habitat for a wide array of other insect species, including many pollinating bees and wasps that maintain flowering species in the forest. Beetle-created snags provide important habitat for birds, with as much as 45 percent of all bird species dependent on dead trees for home and other habitat needs.

Snags are used by many small mammals for shelter. When snags fall into streams, they contribute to fish habitat and stream bank stability. Suffice it to say, removal of beetle-killed trees from the forest actually leads to a reduction in forest ecosystem health.

The most cost-effective strategy to safeguard homes involves modest thinning of trees near buildings (typically 100-150 feet), combined with the installation of metal roofs, screens on attic vents and other measures that protect homes from a fire – should one occur. Focus fire risk reduction in and near homes, not out in the backcountry.

Dead trees are not a “wasted resource” but the biological capital that is reinvested in the forest ecosystem. Beetles are not destroying our forests, rather they are creating new ecological opportunities, increasing biodiversity and improving ecosystem health and perhaps even reducing fire risk.

George Wuerthner is an ecologist, writer and photographer with 34 published books, including “Wildfire: A Century of Failed Forest Policy.”