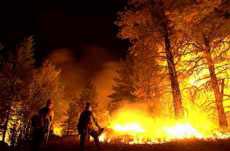 However, drought conditions accompanied by lightning and high winds, but little precipitation, combined to generate most of the blazes. Roaded and logged areas burned as quick or more quickly than unlogged ones. The situation was further complicated by the thousands of people who have moved into the forests, setting the stage for personal loss and tragedy.

Even western politicians acknowledge that western forests have evolved with wildfires. While awe-inspiring and dramatic, the fires have not, as timber advocates claim, destroyed the national parks and forests.

Conservationists must be on the lookout for “bait and switch” tactics which seek to advance commercial logging under the guise of fire prevention. If you broke one of your toes and went to the ER, you wouldn’t be happy if the doctor set your nose. In dealing with protection of forest homes, we need to treat the problem where it is actually located, which is mostly in people’s backyards, not in the middle of the forest. The key is thinning the dense fuel accumulations directly adjacent to structures to create “defensible space.” According to fire scientists, what is done within 150 feet of a home has infinitely more to do with its survivability during a forest fire than what is done deep in the forest miles away.

However, the U.S. Forest Service takes a sensible idea to its most illogical extreme by proposing a $12 billion program of forest “thinning” across 40 million acres of National Forests from the Pacific Ocean to the Rocky Mountains. Not only does such a plan ignore the physical impossibility of “thinning” the vast rugged landscapes of our Western forests, budget realities will not allow such grandiosity. Ninety years of fire suppression and logging activity may be responsible for buildups of fuels on and near the forest floor. However, it is a myth that vast areas of the Northern Rockies were composed of monolithic park-like stands of ponderosa pine, as suggested by many foresters. A casual reading of Lewis & Clark’s journals refutes this idea. Broad-scale, “one size fits all” strategies should be viewed with suspicion.

There are a number of fire relief bills, rider amendments and other fire and forest health related measures being discussed within Congress and the Executive Branch. The wisest approach is to direct most of the money to local governments, who, assisted by a permanent corps of experts serving in an extension forestry-type arrangement, can help private landowners begin the process of assuming primary responsibility for their private structure defense. Private property fire protection is currently heavily subsidized through the blank check fire fighting policy which still reigns on federal public lands. Taxpayer funds expended for structure defense are often many times the value of the structure. This inefficient system must end.

Moreover, defense of structures must be separated from commercial logging activity. The issue and need must be framed as one of natural disaster preparedness, and not an economic opportunity for the timber industry. Congress and the Executive Branch must apply a “de-coupling” strategy in addressing these issues associated with urban sprawl.