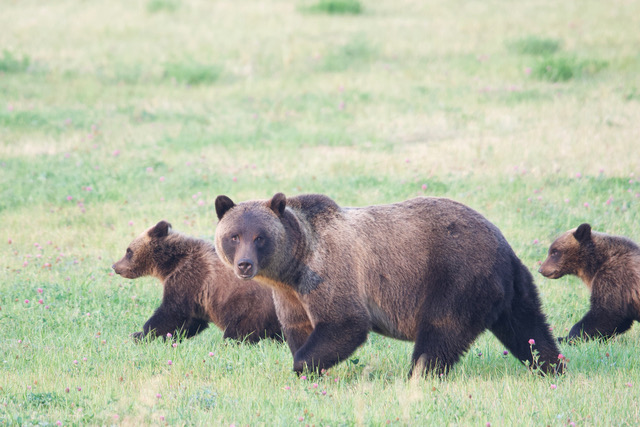 Misclassified roads in our national forests probably pose the most imminent threat to grizzly habitat today — and today there are many more such roads than there were in 1993.

But there’s nothing frivolous about the Alliance for the Wild Rockies filing a 60-day notice of intent to sue the U.S. Forest Service to stop the Ripley logging project in Cabinet-Yaak grizzly bear habitat. The project calls for 10,854 acres of commercial logging, including 3,223 acres (5 square miles!) of clearcuts and bulldozing in an astounding 27.6 miles of new roads in the Kootenai National Forest in northwest Montana.

As the U.S. Fish and Wildlife Service noted in its 1993 Grizzly Bear Recovery Plan, “roads probably pose the most imminent threat to grizzly habitat today.” Why? Because roads bring humans into areas where grizzlies live and increase the potential for human-grizzly conflicts that often result in dead bears — and there are many more roads now than there were in 1993.

Because roads are a very serious problem for grizzly bears and other wildlife, the Forest Service claims to “remove roads” by bulldozing a berm across them, not recontouring the road base. The agency may wish to pretend the road no longer exists, but research, backed up by photographic evidence, proves that people simply drive over and around the berms, rendering the road “removal” totally ineffective.

Add to the “road removal” deception that in the Ripley project, the Forest Service is doing what it often does when it finds illegal roads — it simply adds the 11 miles of “undetermined roads” to the forest road system — and then argues there are no effects to grizzlies or other wildlife since the roads are already on the ground.

Likewise, despite claiming the new logging roads it intends to bulldoze in are “temporary,” unless they are fully removed by recontouring, illegal motorized use will occur after the project ends. Then, despite the continued illegal use of the supposedly “closed” roads, the agency will add them back into the system as legitimate for the next logging project.

Given this well-documented pattern, the Forest Service and the Fish and Wildlife Service must determine whether the 11 miles of roads were “temporary roads” from past logging projects, monitor illegal use to determine whether berms, gates and other barriers are actually effective as closures, and then honestly tell the public whether the new roads constructed for this project will become “undetermined roads” in the future.

The reality is when these agencies say bulldozing more logging roads will have no effect on Cabinet-Yaak grizzly bears, they are violating the Endangered Species Act by withholding the legally required protections to recover the bears. Without these protections, the area is likely to experience a road density that is so high that grizzly bears will avoid it for the next 25 years and may never again have enough recurring grizzly use to contribute to recover this imperiled, tiny grizzly population.

Unless the Biden administration withdraws this illegal logging project which was designed by the Trump administration, we will be forced to act as Congress intended and file a citizens’ lawsuit to enforce the law. If we win, the federal government has to pay the legal fees for the attorney we hired to prosecute this case — but the Alliance doesn’t get any money. Our only reward is knowing we have helped protect and recover grizzly bears instead of watching this tiny isolated population become genetically inbred or extinct.

Please consider helping us in our legal battle to force the Forest Service to follow the law and keep the imperiled Cabinet-Yaak grizzly bears from going extinct.