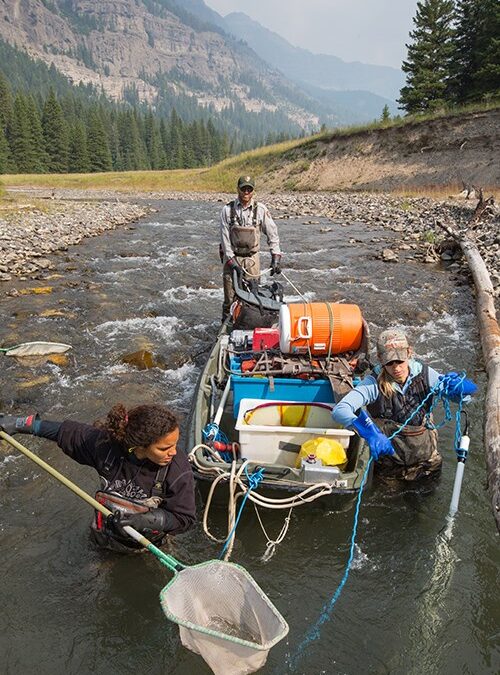 Two weeks ago, Laurie Brown, a licensed nurse practitioner, called the Alliance for the Wild Rockies out of concern for the Game Creek watershed. She lives just south of Jackson Hole, Wyoming, and gets her drinking water from a well adjacent to Game Creek. She recently discovered that the Wyoming Department of Game and Fish had officially approved the project to dump rotenone into Game Creek on Aug. 20 to poison out non-native brook trout and reintroduce native Snake River cutthroat trout.

Rotenone not only kills brook trout, but anything with gills, including the aquatic insects and any amphibians unfortunate enough to be present when the stream is poisoned. It could also get into the groundwater that feeds Laurie’s well system, and scientists caution that rotenone is harmful to human health.

Rotenone is increasingly poured into streams by the U.S. Forest Service and state agencies in “poison and plant” projects because it is cheaper than removing non-native fish through labor-intensive electroshocking, fishing and netting. But poisoning entire water bodies — especially flowing streams — severely alters biodiversity and causes a broad loss of taxa and species from the aquatic ecosystem.

Here in Montana, in spite of significant opposition and the threat of a lawsuit for using motorized equipment to access and poison the waters in the Scapegoat Wilderness Area, the Lolo National Forest just approved the state’s plan to poison 67 miles of the North Fork of the Blackfoot River and plant westslope cutthroat trout. It’s worth remembering that this stream reach was historically fishless until brook trout were planted by Montana’s Department of Fish, Wildlife and Parks.

In Wyoming, the Forest Service failed to inform the public or take comments on the project as required by the National Environmental Policy Act, even though the stream was connected to waters on Forest Service land. That’s important because as the Environmental Protection Agency has cautioned: “the persistence of rotenone can vary depending on environmental conditions.” Because of the potential effects on humans and the deadly effect on aquatic invertebrates, agencies use a toxic chemical, potassium permanganate, to deactivate rotenone at the end of the target “stream reach.”

This, however, doesn’t always work. In Montana’s Cherry Creek, the rotenone persisted beyond the “deactivation station” and poisoned the stream all the way to the Madison River. It also doesn’t work on rotenone that reaches groundwater since air and sunlight are needed as part of the deactivation process.

Potassium permanganate targets human organs including the respiratory and central nervous system, blood, kidneys, and can cause nausea, vomiting, gastrointestinal irritation and burns to the mouth and throat if ingested. It may also cause severe irritation or burns to the eye and skin and has been found to cause reproductive toxicity in laboratory animals. Deploying another toxic chemical to deactivate rotenone will certainly not return the stream to its former non-polluted condition.

Fortunately, Wyoming’s fisheries biologist was willing to listen to our concerns and our proposal for alternative ways to remove the non-native brook trout.

“In the years that we have been working on developing the rotenone project, substantive advances have been made in a novel technology for Brook Trout removal that now seems closer to availability than we predicted. The new technology requires labor intensive mechanical removal (electrofishing) of Brook Trout followed by stocking of what are essentially trojan males that only produce male offspring, eventually leading to a population collapse. After considerable discussion and investigation, we feel Game Creek may be suitable for a trial of this application in Wyoming.

Given that another method may now be available to us for Brook Trout removal in Game Creek, we are putting plans to chemically remove the fish with rotenone on hold.

This stream is still a high priority for us, and we intend to continue to pursue removal of the brook trout population using the best available tools. To do this, we will need your help. Over the course of the last year, many of you have volunteered your time to assist with electrofishing. I would like to take you up on those offers. As we develop our plan moving forward, I will be in touch. In the meantime, please consider spending some time with us electrofishing on Game Creek throughout August.”

The community quickly volunteered to help and the state raised the limit to 16 brook trout per person per day. Laurie and others will be putting on waders and helping electroshock fish that were not caught.

If Wyoming is using non-poisonous alternatives to restore native fish species, why does Montana persist with the North Fork of the Blackfoot project, especially when other “poison and plant” experiments have had very low success rates on flowing streams? Clearly, if Wyoming can do it, it is long past time for the Forest Service and state fish and wildlife agencies to try other methods besides dumping poisons and toxic chemicals in our precious, clean, wilderness headwater streams.