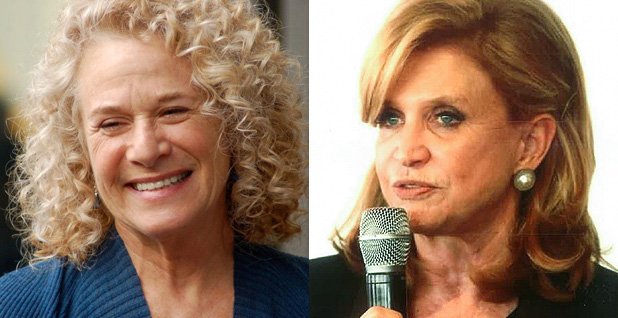 New York Rep. Carolyn Maloney (D) has reintroduced sweeping legislation to permanently protect 23 million acres of pristine public lands and 1,800 miles of rivers and streams in five Western states, something she has pushed for more than a decade.

The bill, H.R. 1321, would not only designate 23 million acres of inventoried roadless areas as congressionally designated wilderness, but also establish what Maloney’s office describes in press materials as a system to “connect biological corridors” used as migration routes for plants and animals. The “Northern Rockies Ecosystem Protection Act” — which targets roadless lands in what the bill text refers to as the “bioregion” of Idaho, Wyoming, Montana, Oregon and Washington — is among the largest wilderness bills, if not the largest, ever proposed in the Lower 48 states.

Notably, the bill was not included in the major public lands legislation that passed the Senate earlier this month and is expected to pass the House and head for the president’s signature this week.

Maloney has sponsored similar versions of the bill, under the same title, in each congressional session since 2007, and each time, the legislation has failed to gain much traction. It has met with stiff resistance from Western GOP congressional leaders, in part because it would lock up so much land for conservation.

Critics argue that would harm rural economies in those remote areas. They have also charged that the bill would have negative impacts on recreational activities like hunting and fishing. The 23 million acres of land in question are currently managed by the Bureau of Land Management and Forest Service.

But the bill text expressly states that the wilderness designations would allow “for historic uses” of the land, specifically hunting, fishing and “firewood gathering.”

“Conservation of roadless areas on these public lands, which produces clean water, protects native fisheries and native flora and fauna, and provides scenic and recreational qualities, also preserves options for sustainable economics through activities such as hunting, fishing, and wilderness-based recreation,” the bill text states.

The bill also calls for keeping water available for ranchers and farmers downstream of the wild and scenic rivers in question “until later in the season when it is most needed,” according to a bill summary provided by Maloney’s office.

“This legislation would preserve an important part of our country’s beautiful wilderness for future generations, secure an important habitat for wildlife, and help fight climate change in the process,” Maloney said in a statement. “It is up to us to be stewards of the earth and preserve these irreplaceable resources for our children and their children.”

Maloney’s office, in the bill summary, explains that the legislation covers such an enormous area because that’s what’s needed to “protect forest canopies that absorb greenhouse gases.” The summary notes that national forestlands “absorb an astounding 10 percent of the carbon that America creates.”

In addition, the five states in the area covered by the Northern Rockies bill are home to the headwaters of “three of our country’s major waterways that provide water to tens of millions of Americans — the Columbia, Colorado and Missouri Rivers,” the summary states.

The sweeping nature of the bill has captured prominent public support, including from former President Carter and singer/songwriter Carole King, who is backing the latest version of the bill.

“Trees store carbon. Hundreds of millions of trees store a whole lot of carbon, which slows climate change, which slows the rising of oceans,” King, a resident of Sun Valley, Idaho, said in a statement provided by Maloney’s office. “By ending deforestation on more than 23 million acres of public land, the Northern Rockies Ecosystem Protection Act addresses climate change in a big way.”

The bill currently has 20 co-sponsors — all Democrats. Previous versions of the bill, including in 2009, have had more than 100 co-sponsors. Rep. Earl Blumenauer (D-Ore.) is the only co-sponsor from one of the five states covered by the legislation, a sore spot for Western Republicans who have criticized the bill in the past.

Maloney’s office argued that the bill is needed to counter the “overemphasis on resource extraction” on public lands by the Trump administration. “Economic instability and high unemployment in rural, resource-dependent communities is a common result of overexploitation of these lands,” the bill text said.

It’s not clear what the prospects of success are for the latest iteration of the legislation, even with Democrats retaining control of the House. The Natural Resources Committee held a hearing on the bill in 2007, and the National Parks, Forests and Public Lands Subcommittee did so in 2009, but it never received a markup.