The final roadless area conservation rule prohibits road building and logging in national forest roadless areas with some exceptions, such as logging to reduce the risk of unnaturally intense fires. The rule covers all 58.5 million acres of inventoried national forest roadless areas, including those in Alaska’s Tongass National Forest. The rule allows a substantial amount of previously planned logging to continue in the Tongass, but prohibits roadless area logging thereafter. No road building is allowed for oil and gas drilling or ski area development in roadless areas, except within areas already under lease or permit. The rule will not close any roads or trails, and it will not restrict off-road vehicle use or access to non-federal land inholdings within roadless areas. 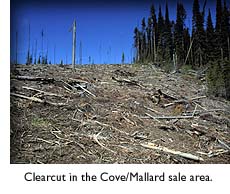 Why do we care? This photo shows the Cove/Mallard “Roadless Area” as managed before the new Roadless Area Conservation Rule. Bush and Western Republicans want to reinstate this approach to “conservation.” Read about their rollback dreams.

On January 5, 2001, President Clinton and Chief Dombeck announced the final rule on national forest roadless area conservation. The final rule and record of decision were published in the Federal Register on January 12 (66 Fed. Reg. 3244). The rule is scheduled to take effect on March 13.

Road Building. The final rule generally prohibits road construction and reconstruction in inventoried roadless areas. Exceptions to the road building prohibition allow for access to non-federal land inholdings and for hard-rock mineral exploration and development. Other exceptions include roads needed for public safety and environmental clean-up, as well as federal highway projects.

Logging. The final rule prohibits logging in roadless areas for the sake of timber production but allows logging for some other purposes, provided that it can be done without building new roads. Probably the most important exception is for logging of “generally small diameter” trees to reduce the risk of unnaturally large or intense wildfires. The primary effect of this exception is likely to be in low-elevation ponderosa pine forests of the Intermountain West. The rule also permits logging to improve habitat for imperiled species. In addition, logging can continue within portions of any roadless area that have been roaded and logged since the time the area was inventoried (in many cases inventories were conducted in the early 1980s). Approximately 2.8 million acres of inventoried roadless areas could be affected by this exception, or about 5 percent of the 58.5 million acres of roadless areas. Any roadless area timber sales for which records of decision have been issued would be allowed to proceed.

Tongass National Forest. The final rule includes the 9.3 million acres of roadless areas in Alaska’s Tongass National Forest in the ban on road building and logging, but it allows a considerable amount of already planned logging to continue. The rule exempts Tongass timber sales for which the Forest Service has already completed a draft environmental impact statement. This exemption could allow up to 386 million board feet (mmbf) of roadless area timber sales, in addition to 261 mmbf of roadless area sales already under contract but not yet logged. Together with 204 mmbf of timber sales in roaded areas of the Tongass, that is sufficient timber to supply likely market demand in southeast Alaska for the next seven years.

Off-Road Vehicles and Access. The final rule does not close any roads or trails or otherwise restrict existing access to roadless areas for ORVs or other recreational uses. Access to state and private land inholdings will also not be affected. Maintenance of classified roads in inventoried roadless areas can continue.