by Mike Bader, Executive Director, Alliance for the Wild Rockies

For the modern conservation era, barely a century old, the calendar changeover to the year 2000 represents an opportunity to consolidate momentum and establish lasting conservation policies to guide us into the next century.

Therefore, I feel it appropriate to declare this the Year of the Roadless Area. When one digs through all the buzzwords and lexicon of conservation biology and gets down to the bedrock, it is the roadless area upon which the future of our wild ecosystems rests. 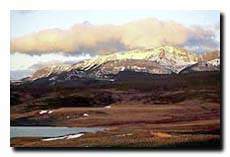 The Rocky Mountain Front contains vast areas of roadless
lands critical to the future of the grizzly bear.

Two proposals – one national and one bioregional – are crucial to the future of roadless areas and our wild ecosystems. The National Forest roadless initiative may represent a turning point in our nation’s conservation history. It has the potential to protect more than 50 million acres, and in an important move, Senator Max Baucus (D-MT) and other northwest senators support it. Its outcome, however, is far from certain, and the once-stagnant remnants of the Sagebrush Rebellion are using opposition to the roadless initiative as their war cry. They seek to reverse the progress of the last decade and turn the clock back to when land management decisions were unfettered by concerns for endangered species, clean water, big trees, and ecosystem protection.

For conservationists in our region, The Northern Rockies Ecosystem Protection Act (NREPA) represents a keystone proposal that could well set the course for a more holistic, enduring conservation policy for America, and a positive example for the world. The Wilderness Society, the oldest conservation organization dedicated to protection of wilderness, has recently joined the ranks of NREPA proponents. The past year ended with approximately 80 sponsors, well on the way to the goal of conservationists of 100-plus in this session of Congress.

AWR members can expect a steady stream of reports, alerts, and calls to action from us throughout this year. Wilderness preservation is a battle that the silent majority will not win. In our participatory democracy, if you do not speak, you will not be heard.

In the year 2000, let us resolve to push very hard for continuing progress on NREPA and the National Forest roadless initiative. Help chart the course for a new and enduring conservation vision and policy. Make the Year of the Roadless Area a reality. Write or call your representatives today and urge them to sponsor NREPA and to support the National Forest roadless initiative.