The Alliance needs your help to fight nuclear reactors in Montana 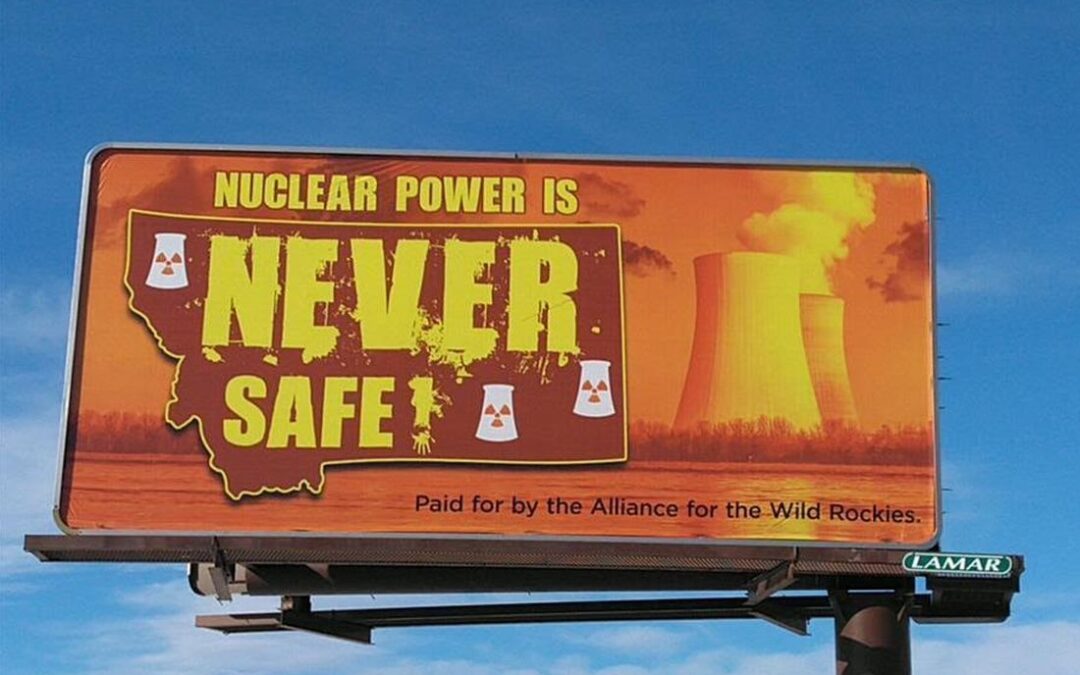 For the last 44 years, nuclear power in Montana has been banned unless approved by the voters. The ban was passed by Citizen Initiative, but Republican majorities in the 2021 Montana legislature repealed the the ban and Republican Governor Gianforte signed the bill into law. Now, these same Republicans want to build nuclear reactors in Montana to replace the dirty, obsolete coal-fired power plants at Colstrip. There are similar proposals for Wyoming’s shuttered coal plants as well as new reactors at the Idaho National Laboratory.

The Alliance for the Wild Rockies is fighting these proposals and we could really use some help! We have paid to put up two billboards so far, one in Missoula and one in Billings, and if you’d like to help keep Montana nuke-free it’s quick and easy to donate via our GoFundMe site. Any donation helps, but the more you donate the more we can fight nuclear power.

Many people – and unfortunately a growing number of so-called “green” organizations – see nuclear power as a great non-carbon source of electricity. But the former heads of nuclear regulatory bodies across Europe and the US put out a statement in January voicing their opposition to nuclear energy as a climate solution, writing: “The reality is nuclear is neither clean, safe or smart; but a very complex technology with the potential to cause significant harm. Nuclear isn’t cheap, but extremely costly.” They also added that nuclear power is “unlikely to make a relevant contribution to necessary climate change mitigation needed by the 2030’s due to nuclear’s impracticably lengthy development and construction time-lines, and the overwhelming construction of the very great volume of reactors that would be needed to make a difference.”

Gregory Jaczko, former chairman of the US Nuclear Regulatory Commission confirmed that assessment, saying: “Nuclear has shown time and time again that it cannot deliver on promises about deployment and costs. And that’s really the most important factor when it comes to climate.” Jaczko also said we can replace carbon-producing electricity with renewables and he’s right. New renewable sources of electricity as well as ever-improving electricity storage capacity are being built on time and on budget and are generating affordable electricity, unlike nuclear reactors.

A 2021 report from Wall Street firm Lazard estimated the cost of new nuclear energy at $131 to $204 per megawatt-hour compared to an average cost of $27/MWh for utility-scale solar and $25/MWh for wind. The lower cost for renewable energy more than pays for electricity storage to back up renewable energy.

Mining uranium for nuclear reactor fuel is also dangerous since uranium mining produces tailings that are piled in impoundments close to the mine. These tailings pose serious environmental and health risks from radon emissions, windblown dust, and leaching of contaminants – including heavy metals and arsenic – into the water.

From 1944-1986 the United States extracted 4 million tons of uranium ore from 500 mines on Navajo land that were then abandoned. The rates of lung cancer and other diseases affecting Navajo people living near the mine rose drastically. The Navajo were able to stop uranium mining on their land but these problems still exist with other uranium mines today and should not be ignored in considering the future of nuclear energy.

Due to the fact that uranium is mined in other states and must be shipped into Montana, building nuke plants in Montana to replace the old coal-fired generators will impact people and the environment far from our borders. Moreover, Montana doesn’t need the power since we already export about half of the electricity we generate to other states. This is strictly a high-cost, high-risk scheme to replace 50-year old, uneconomical, and environmentally destructive coal plants with uneconomical and dangerous nuclear reactors.

Bottom line is that building nuclear reactors at the headwaters of the greatest rivers in the nation is not just a concern for Montanans but also for all Americans. After all, we outlawed nukes 44 years ago until that ban was overturned last year by an arrogant and ignorant Republican-dominated Legislature and the first Republican governor in 16 years.

The choice is clear: We can and should focus on fighting global warming with conservation, renewable energy generation, and electricity storage – or we can go down an extremely expensive, environmentally-destructive path of nuclear energy that has failed time and time again while leaving behind a legacy of radioactive waste that remains deadly for thousands of years.

The Alliance for the Wild Rockies is working hard to stop the effort to build nuclear reactors in Montana – and we sure would appreciate it if you can find a few bucks to help us out. Thanks!