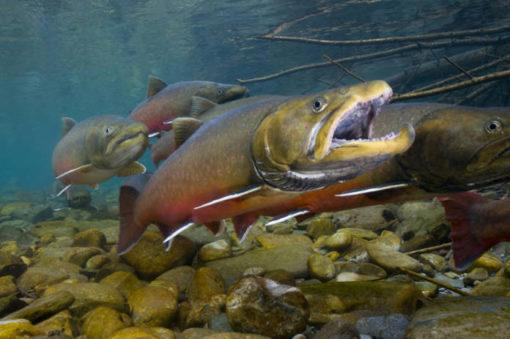 The Alliance for the Wild Rockies defeated the Trump administration yet again this month when a federal judge ruled against its request to dismiss our case against the Bureau of Reclamation’s illegal killing of hundreds of threatened bull trout each year near Glacier National Park.

Background: Bull trout have been listed as “Threatened” under the Endangered Species Act for 20 years. Nonetheless, bull trout and other native fish in the St. Mary drainage on the east side of Glacier National Park have been killed by the hundreds by the Milk River irrigation project – by “entrainment” when fish are stuck in canals that are then dewatered, by obstruction of upstream passage, by low water flows, and by increased stream temperatures. Entrainment alone has been documented to kill 400-600 bull trout each year.

The Milk River Irrigation Project was authorized in 1903 to provide for irrigation in the lower portion of the Milk River basin in north central Montana. The water diverted through these structures originates in Glacier National Park, is taken from the Blackfeet Indian Reservation and diverted across the Reservation without giving any of the water in the canal to the Blackfeet, and then sent hundreds of miles east for agriculture and drinking water in the Milk River Basin.

This irrigation project has been identified as the primary threat to bull trout in the Saint Mary Recovery Unit and it diverts cold, clean, and abundant water coming out of Glacier National Park into shallow, sun warmed irrigation ditches that are deadly to our native fish. In particular, bull trout require the coldest water of any Montana trout – no warmer than 60 degrees. Early this year, the Alliance filed a lawsuit against the Bureau of Reclamation to stop them from illegally killing hundreds of bull trout each year.

Reclamation’s “sky is falling” response was that we were trying to shut down the entire irrigation system and that it would take hundreds of millions of dollars to fix the problem. But Reclamation was purposely confusing the costs of rebuilding the entire canal system, which is over a century old, with the relatively inexpensive cost of simply installing fish screens in front of canals to prevent fish from getting stuck and dying in canals.

In May, the over 100 year-old canal broke apart and failed, forcing the Bureau of Reclamation to shut down the canal to undertake $8 million in emergency repairs. Since the agency knows its conduct towards bull trout is illegal, the Trump administration saw the canal failure as an excellent opportunity to try to get our case dismissed as moot, and thereby avoid taking legal responsibility for its years of illegal killings of thousands of bull trout.

However, the federal court rejected the agency’s transparent attempt to avoid accountability. The court ruled that it could not allow “Reclamation to continue engaging in unlawful behavior with no concrete end date or abatement measures in place.”

Since the canal could be repaired at any time, and since Reclamation has no plan to suspend its operations, the Alliance’s case will move forward since “Congress has spoken in the plainest of words, making it abundantly clear that the balance has been struck in favor of affording endangered species the highest of priorities.”

Our rapidly-warming planet and melting glaciers already make it very difficult for bull trout to survive. The Alliance Is working every day to stop the Trump Administration from making it even harder. With the help of our supporters, we’ve built a strong track record of victories in court.

Please consider helping us continue the fight to protect native species and their habitat.