by Todd Wilkinson, special to The Christian Science Monitor 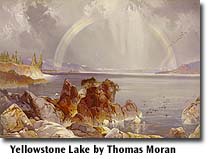 A century ago, as the nation looked back across an expanse of Western land that Thomas Jefferson said would take centuries to fill, the American frontier had already been declared closed.

But in those first days of the 1900s, the settling of the West brought with it a grim reality: The wildlife that had sustained the Indians and established scenes of romantic grandeur for famous landscape painters was gone.

The toll exacted by hunting and clearing land for European livestock included 60 million bison, hundreds of millions of prairie dogs, and millions of elk, wolves, and bears. So rare were large animals that sightings made newspaper headlines.

Today, many of these species have been rescued from extinction through adoption of measures such as the Endangered Species Act and the creation of national wildlife preserves. However, a new challenge is rising, environmentalists say, creating a crisis for next century: the “islandization” of natural habitats.

“We overcame the wildlife declines caused by [overexploitation], but at the beginning of this century, habitat loss and fragmentation make that problem seem almost insignificant,” says Michael Soulå, a well-known conservation biologist. He notes that the rate of petitioning for species to be protected under the Endangered Species Act is accelerating.

How to reconnect the landscape 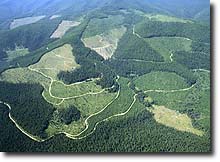 As a result, conservationists – and even politicians – are calling for larger and larger chunks of land to be protected. Others go further, suggesting that tamed landscapes be “rewilded” and preserves be connected with biological corridors.

The Clinton administration’s proposal to protect as much as 60 million acres of roadless forests is recognition that the government itself embraces the “bigger is better” approach to saving species habitat, experts say.

One template for creating a latticework of preserves is the Sky Islands Wildlands Network, a proposed park that would cover portions of Arizona, New Mexico, and Mexico. Beyond just poring over maps, promoters have done biological surveys and intend to make them a basis for legislation in Mexico and Congress.

A similar plan, the Northern Rockies Ecosystem Protection Act, would protect and restore 18 million acres of land in the inner West. It has won introduction to Congress each year for the past decade but not passed. Supporters, though, say support has steadily grown on Capitol Hill.

The plan, drafted by the Montana-based Alliance for the Wild Rockies, would use federal money usually appropriated for things such as logging to give timber workers jobs restoring forests and degraded watersheds.

The Wildlands Project in Tucson, Ariz., meanwhile, has identified 31 different regions for rewilding, including the Sky Islands network and forests in the Adirondacks, Sierra Nevadas, and the Appalachians.

Just as hunters and anglers rallied a century ago with preservationists like John Muir to create a system of national parks, refuges, and timberland reserves, a critical mass is growing again. Last week, a national survey by the Theodore Roosevelt Conservation Alliance showed that 86 percent of anglers and 83 percent of hunters want to keep remaining roadless areas in national forests road-free.

“It is remarkable how much the mainstream conservation movement, federal agencies, and scientists have brought into strategy of diagnosing problems and answering them with biological prescriptions,” says Dave Foreman of the Wildlands Project.

Some Republican lawmakers express concern about grandiose bioregional conservation proposals, arguing that loggers, miners. and ranchers will be “locked out” of the landscape.

“There has never been any doubt in my mind that we can save the spotted owl and the grizzly bear, but we need to be more flexible,” says Doug Crandall, who works for Rep. Helen Chenoweth (R) of Idaho on a key congressional committee.

He says new approaches to protecting ecosystems need to be tried, but setting aside lands by decree as President Clinton has – and using the “heavy hand” of the Endangered Species Act – has caused resentment.

Mr. Foreman acknowledges that green groups must overcome suspicion of their motives in rural communities. “The conservation movement really doesn’t know how to talk to rural folks and … Republicans,” he says.

For its part, the US Fish and Wildlife Service says it needs to move beyond its costly approach of protecting single species and embrace strategies that protect many animals at once. One program allows landowners to restore habitats for endangered species without incurring additional regulatory burdens. More than 1 million acres of land have been enrolled in the program.

“As the scientific evidence continues to mount, it clearly shows that we need to think bigger,” says Chris Wood of the US Forest Service, who says the focal point of bioregional conservation begins with watersheds, where the highest concentration of species in a landscape cluster.

Restoring them will be costly, and inconvenient, he says, but it must be done. “Am I confident that what we have done is enough to save species in the future?” he asks. “Absolutely not.”